On the hill overlooking the historical Bikan area is the ancient Achi Shrine. According to the Nihonshoki (Chronicles of Japan) it was founded way back in the 4th Century AD during the reign of Emperor Ojin. Since that time the shrine has been an important stop for sea travelers and merchants between eastern and western Japan who pray for their safe passage along the Seto Inland sea. 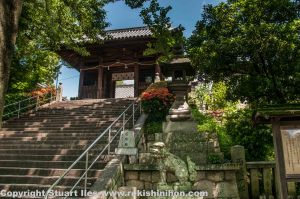 Main entrance to the shrine. 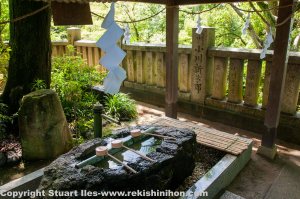 Water purification is important before entering the shrine.

The main shrine was built in 1749 after fire destroyed the original.

The shrine’s origins lay with the Achi clan who settled in the area and were immigrants from Korea. The main deities worshipped are the Munakata deities, who are the female deities of traffic and trade. The Nihonshoki notes that Empress Jingu herself was caught in a storm on the Seto inland sea on her way to the Korean three kingdoms. She stopped off at the shrine and prayed to the Achi deities for safe passage and then a sword of light appeared and cleared the storm which allowed her to continue he voyage to Korea. During the reign of her son, Emperor Ojin, the Munakata deities were enshrined here and the area named Myoken-gu. This is the origin of this shrine.
Nowadays a number of sub-shrines are found within the shrine’s grounds. One of them is for Tenjin (ancestral spirit of Sugawara no Michizane), the kami for learning, and his subshrine was filled in syncretic fashion with small Daruma dolls (honouring Bodhidharma, founder of Zen). The idea is that you paint in one eye when making a vow, and the other eye when succeeding. 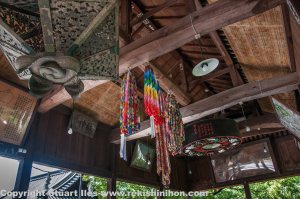 Elsewhere there’s an unusual mikuji (fortune slip) arrangement centred around a mokkoku tree and split into the twelve Chinese zodiac signs. A notice board says the tree is the longest-living in the shrine grounds and associated with making good relationships. You thereby get good luck plus Chinese zodiac fortune.

For those interested in Japan’s pre-Shinto spirit world and the putative origins of its early stone gardens, Achi Shrine is home to a number of large granite boulders known as “Iwakura”. Also called “seats of the gods,” they appealed to the early Japanese, who possessed nothing comparable to shrines or religious reliquaries — to them the stones were natural force fields, attracting the presence of deities. Found in forest clearings and other natural settings, Iwakura were cordoned off with rice-fiber ropes, and the ground around them strewn with pebbles, in what could well be a seminal model of the dry landscape garden. After staring for some time into the dark mirror of the stones, which are older than everything here. These groups of rock are considered valuable sources in researching the origins of rock formations in modern Japanese gardens. 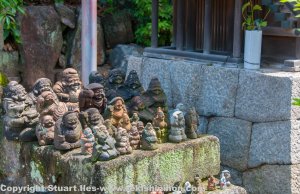 Lastly, a wisteria tree called “Akebono-fuji”, which is a rare kind of wisteria tree and estimated to be between 300 and 500 years old. It spreads its branches about 20 meters square. It is the largest of all of this kind in Japan. Rose-pink wisteria flowers hung down from pergolas are in full bloom from late April to early May. 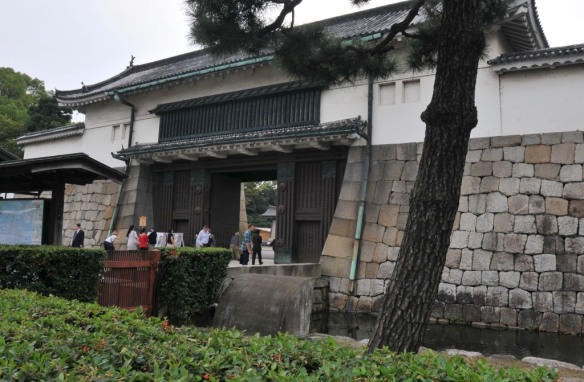 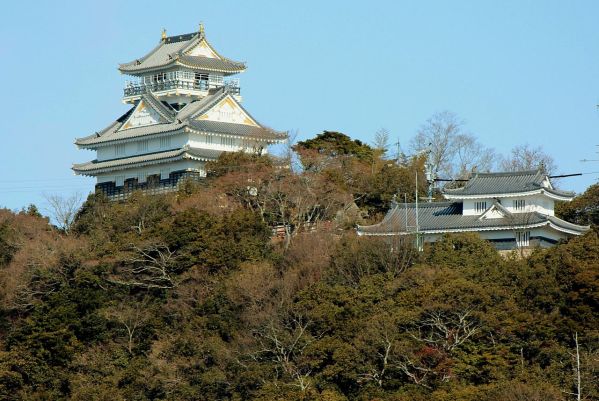 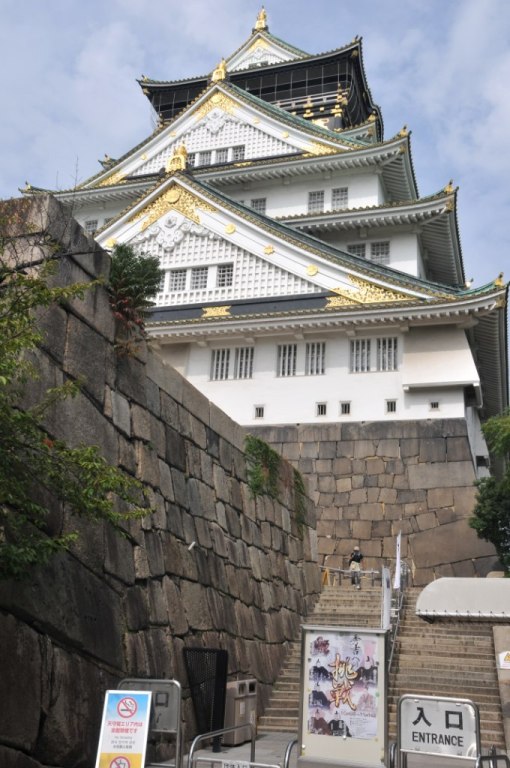 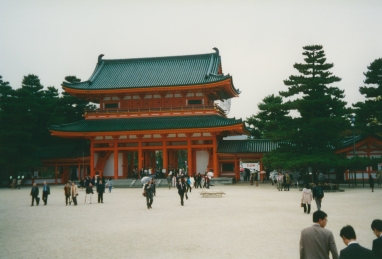 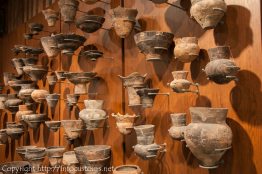 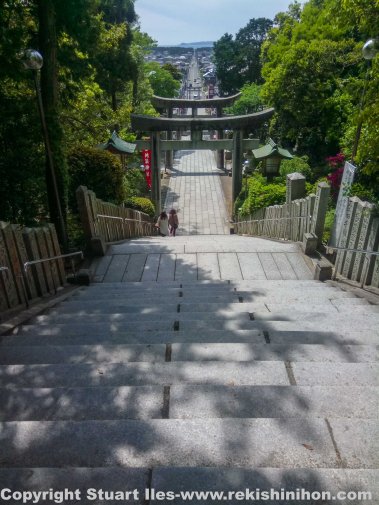 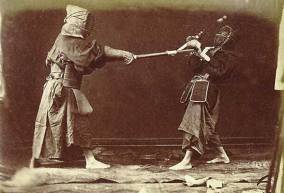 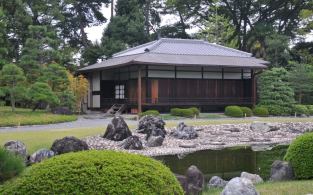 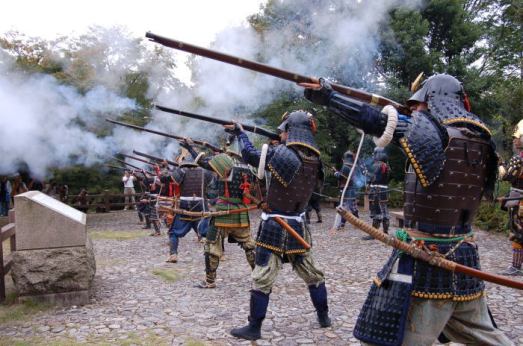 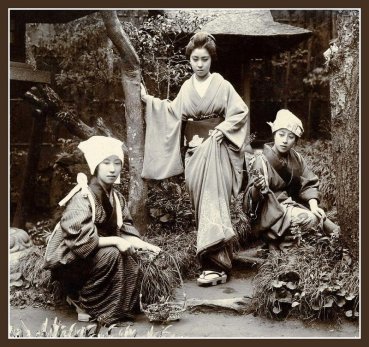 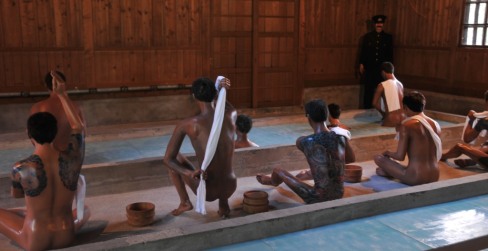 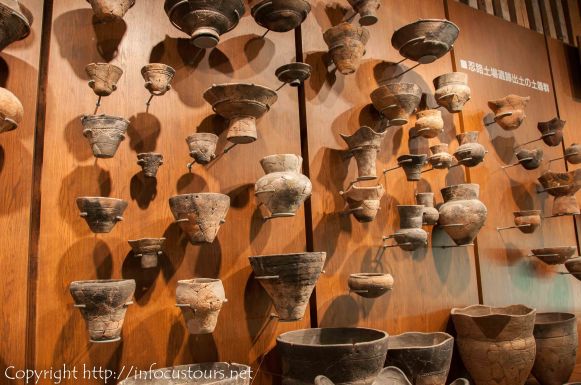 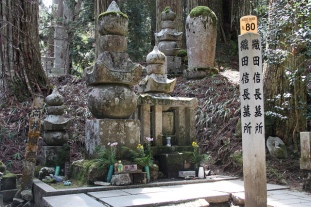 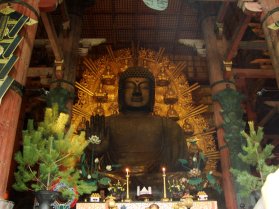 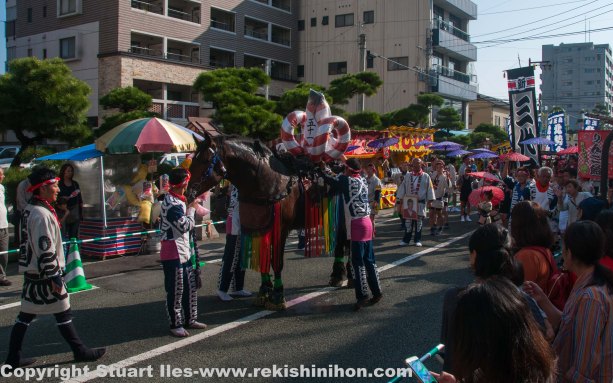 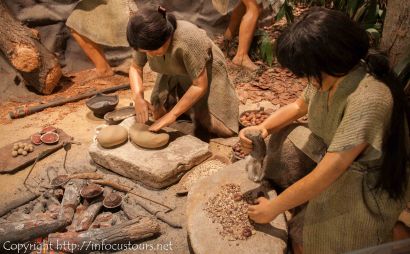 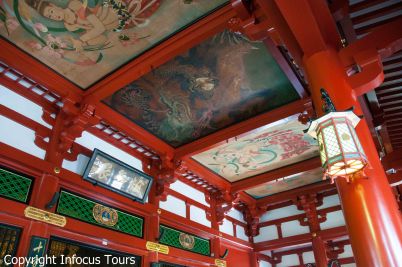 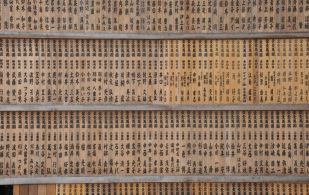 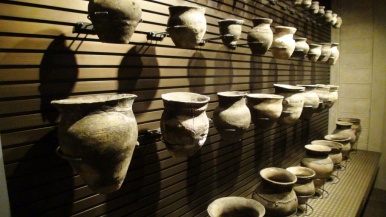 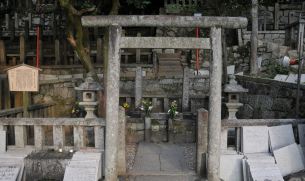